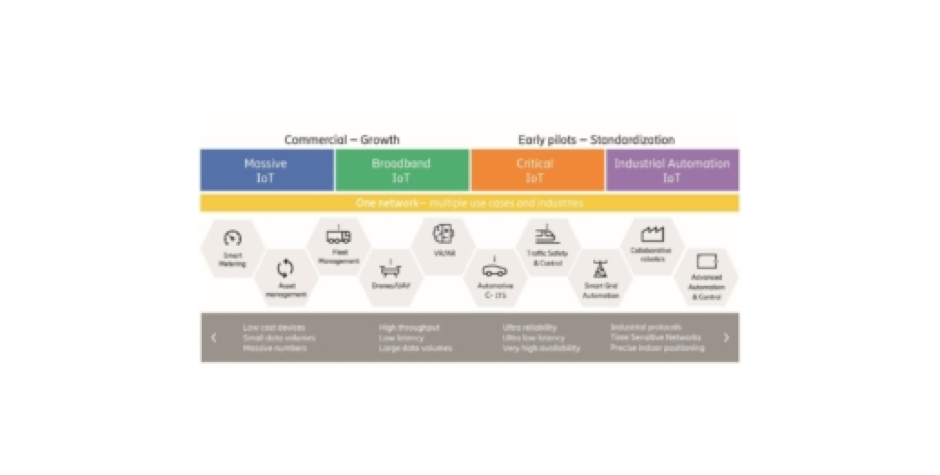 Ericsson Tries to Make Sense of the IoT’s Needs

Amid all of the hype around 5G networks, we’re losing sight of some very important realities, namely that pointing a 5G network at many IoT use cases is like using a fire hose to fill a pipette. So while there are some use cases that need a fire hose, focusing on the network rather than the use cases is dumb. Yet that’s what most media and industry vendors have been doing in their efforts to get us all excited about 5G.

Thankfully, Ericsson has tried to help by creating a few different categories that we can apply to IoT devices that need cellular connections. Each category is grouped based on latency, data needs, and some network architecture needs. The goal is to help the operators — Ericsson’s customers — figure out how to build for popular IoT use cases.

Ericsson has divided the IoT world into four components: massive IoT, broadband IoT, critical IoT, and industrial automation. Each category is designed for cellular connectivity only. Other radio technologies might work for these categories, but Ericsson isn’t interested in those here. It’s only interested in making it easier for cellular carriers to increase the number of connected devices they currently have on their networks and manage them efficiently.

Ericsson expects that the number of connected “things” on cellular networks will reach 4.1 billion by 2024, which is a far cry from the 20 billion to 50 billion total connected things expected over the next five to 10 years. However, it’s still a lot, and the distinctions that Ericsson has drawn are really useful for thinking about network architecture, trade-offs, and what doesn’t make sense for 5G. So let’s dig in.

Massive IoT: In Ericsson’s worldview, these devices require small amounts of data and are not sensitive to latency. Think sensors and devices that need to phone home once or twice a day to share a piece of information. Currently, these IoT products use 4G networks, and frankly, that’s all they will ever really need. Ericsson’s touting a few innovations in its gear around this segment, including cell towers that can handle these use cases while 100 kilometers apart as opposed to 40 kilometers apart. This longer range has a big economic impact on the network in that it will make it more cost-effective to build it out. However, other network providers are gunning for this segment, too, among them satellite operators, LoRa operators, and proprietary Low-Power Wide-Area network companies such as SigFox.

Broadband IoT: This is another use case tailor-made for 4G. Devices calling into this category require low latency and fat pipes for data. Think of a drone that’s trying to stream video or a car’s infotainment system. Marie Hogan, Ericsson’s head of broadband and IoT, product area networks, says that these use cases could eventually move to 5G, but they don’t have to. More interestingly, she says that drones, which require cellular antennas to aim upwards as opposed to downwards toward a person walking on the ground, might need special architecture adjustments to optimize their connections. This is an area where cellular shines. Yes, citywide Wi-Fi might take on some of this load, but for the most part, cellular is the best option.

Critical IoT: This describes use cases where latency is really low — think of messages that need to be delivered in 5-20 milliseconds — and the reliability associated with getting packets through is incredibly high. Ericsson defines this use case as needing 99.9999% reliability. Use cases here would include robotics; some aspects of driving, such as collision avoidance; and sending messages along a smart grid. Hogan argues that we’re going to need 5G for these use cases for latency and for the ability to dedicate network resources to a particular use case. Cellular might be the best option for many of these use cases, especially over wide areas. In local areas, secured Wi-Fi networks might perform this role.

Industrial Automation: This is my favorite category and the one that’s less clearly defined. That’s partly because the standards body for the cellular industry — the 3GPPP — hasn’t defined this standard yet. But the idea here is for some kind of cellular connectivity that can replace the wires in current industrial settings. To do this it will have to offer deterministic networking, handle the needs of the multiple industrial protocols, and be incredibly reliable in a difficult wireless environment. That’s a tall order, but it’s already being worked on at both the 3GPPP and at organizations such as the IEEE. For example, both organizations are working on time-sensitive networking protocols that will bring deterministic networking to Ethernet. Industrial automation will also include aspects of the other three segments depending on what part of the factory is being controlled. For example, sensors will be part of a massive IoT architecture, while video analytics on production lines might require broadband IoT. Finally, critical IoT could be used for robots working alongside humans.

I like how Ericsson is breaking down the use cases for the use of cellular in the internet of things. In some use cases, cellular technologies will go up against cheaper and perhaps more robust alternatives, but I’m also curious if we’ll start to see combinations of cellular and alternative technologies on the same modules as a way to get the best of both worlds for certain jobs. Keep an eye out for that.