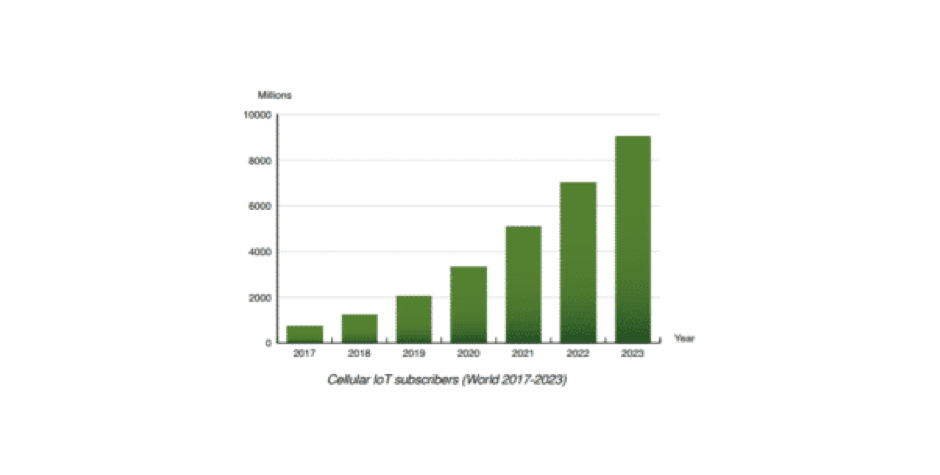 A new report from the IoT analyst firm Berg Insight estimates that the global number of cellular IoT subscribers increased by 70% during 2018 to reach 1.2 billion. Growth was driven by exceptional adoption in China, which accounted for 63% of the global installed base. By 2023, Berg Insight now projects that there will be 9.0 billion IoT devices connected to cellular networks worldwide.

“China is deploying cellular IoT technology at a monumental scale”, says Tobias Ryberg, principal analyst and author of the report. “According to data from the Chinese mobile operators, the installed base in the country grew by 124% year-on-year to reach 767 million at the end of 2018. The country has now surpassed Europe and North America in terms of penetration rate with 54.7 IoT connections per 100 inhabitants.”

The Chinese government is actively driving adoption as a tool for achieving domestic and economic policy goals, at the same time as the private sector implements IoT technology to improve efficiency and drive innovation. Berg Insight believes that the role of the government is the main explanation for why China is ahead of the rest of the world in the adoption of IoT.

Like other advanced economies, the country has widespread adoption of connected cars, fleet management, smart metering, asset monitoring and other traditional applications for cellular IoT. It has also given rise to new consumer services enabled by connectivity like bike sharing. The most distinctive characteristic of the Chinese IoT market is however the way that the government is systematically using new technology to implement its vision for urban life in the 21st century.

In the report, Berg Insight also analyses the IoT business KPIs released by mobile operators in different parts of the world and found significant regional differences. The monthly ARPU for cellular IoT connectivity services in China was only €0.22, compared to €0.70 in Europe. Global revenues from cellular IoT connectivity services increased by 19% in 2018 to reach €6.7 billion. The ten largest players had a combined revenue share of around 80%.